I talked about why I started using playing cards as a random generator in the previous post. In short, as a young gamer I didn’t have the spare cash to pick up every new gaming aid that came out, so I improvised with what I had. And like any gamer, what I had were decks of regular playing cards. Thus was born an entire series of Game Master generators that I used for several years. Today I’m going to talk about my treasure generator. Note that I’ve adjusted it for use with 5e D&D, but it’s just as useful for Pathfinder and other fantasy systems. With a few adjustments you could also use it in a modern setting.

As with all these generators, the treasure generator gives you the framework of a treasure hoard (general value, types of items) and allows you to add the specific details that fit your campaign. So the generator can tell you the characters found jewelry, for instance, but you have to decide if it’s a Third Dynasty Dwarven necklace or a platinum Gnomish puzzle ring.  Or both.

To start, decide what type of treasure hoard you are generating. For a small, personal stash I’ll deal out a blackjack hand (two cards); if I’m going for the Big Boss’s treasure I’ll deal out a five- or seven-card stud hand (but keep all seven). For a dragon hoard or similar big treasure, I’ll do the full Texas Holdem of ten cards (five card hand, five card river). There are ways to adjust the values of these cards to better tune the amount of treasure as well, which we’ll touch on in a bit.

Once you’ve decided how many cards you’re drawing, draw them and look at the suits. The suits tell you the type of treasure present, as follows: 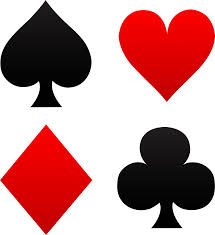 Then look at the value of each card. The numbered cards give you a gold piece value based on the card’s number x10. The Jack is worth 150gp, Queen is 250gp, King is 500gp, and the Ace is 750gp. For Spades, the card value gives you the commonality of the magic item: 2-10 is Common, Jack and Queen is Uncommon, King is Rare, Ace is Very Rare.  I purposely left Legendary out of the generator, as I feel it’s the GM’s perogative to add those items to her campaign.

If you want to adjust the overall value of the treasure found, you can do that in one of two ways. Either change the multiplier up or down, anywhere between x2 (for very pitiful treasure) to x100 (stumbled into an efreeti’s vault). Alternatively, change the monetary base up or down. Gold is the standard, but you could change the values of everything to be in silver pieces or even copper if you want very small value treasures, or up to electrum or platimum to raise the overall value. I tend to adjust the multiplier only, but you can experiment to find the amount of fine-tuning that works for you.

Let’s look at a few examples:

As you can see from the examples, while you get the bare bones of a treasure there is plenty of room for you to adjust the details to better fit your campaign. And much with the GPC generator, you could use the treasure generator ahead of time to have a stock list of treasures ready to go. You could even use it as a very rough method of generating some random encounters, by generating a treasure and then fitting a monster or monsters to that treasure.

If you give it a whir, let me know what you think. Do you have some tweaks or suggestions to make it better? Drop me a line in the comments.