It’s the most wonderful time of the year, Halloween! Spooky mysteries and terrors abound, and it’s the perfect time of year to add a bit of mystery to your campaign. If you’re stuck for inspiration, trust in real-life to provide you with the puzzles you seek. 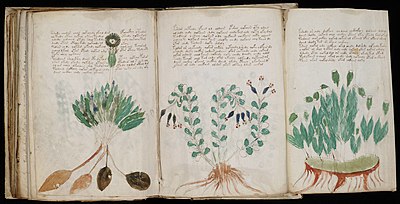 Named after the Polish book seller who purchased it in 1912, Wilfrid Voynich,  the Voynich Manuscript is the very definition of a mystery. The manuscript is hand-written in an as-yet-deciphered language or code, with no punctuation. It features illustrations throughout, though the pictures are as ambiguous as the text, featuring unidentifiable herbal drawings and undecipherable astrological markings. Carbon dating of the vellum places the 240 pages as originating in the 15th century, but it’s unsure whether the book was written then or later on older vellum. There is a common theory it was written in Northern Italy, but there is no confirmation of this. Code breakers and cryptographers from WWI onward have tried and failed to decode the manuscript. It’s theorized the entire book was supposed to be some sort of Medieval herbal or pharmacopoeia, but by and for whom, no one knows. Unlike other similar documents from that time period, it isn’t clear to what plants the manuscript refers; attempts to match them with other known plants from the time period have proven inconclusive at best.

In 1587, Sir Walter Raleigh dispatched Jon White and another ship of colonists to settle in the Chesapeake Bay region, but also to check in on the Roanoke Island colony in Virginia. White’s scouting became a new attempt to recolonize the island at the behest of fleet commander Simon Fernandez. However, relations with the local Croatan tribe remained sour thanks to previous conflict, and later that year White sailed back for England to beg for additional colonists and supplies. Leaving behind his newly born granddaughter and 115 colonists, White expected to return in support of the foundling colony. When he returned, however, the colony and its inhabitants were gone; houses dismantled, and the word “Croatan” carved into a tree. Theories abound as to why the colony disappeared, from Spanish or Native slaughter, to integration with the local tribes for survival, to the colony moving while White was in England and meeting misfortune in its new location. While there is new archeological evidence to support one or another of these theories, there is still no conclusive word on the fate of “The Lost Colony”.

Originally launched as the Amazon in 1861, the later re-named Mary Celeste was an American brigantine which carried goods across the ocean uneventfully until 1872. On December 4 of that year, the Canadian brigantine Dei Gratia discovered her under partial sail near the Azores Islands, with no one on board and her life boat missing. A search of the ship turned up many strange details: the last log entry was ten days earlier, with no mention of disaster or misfortune; the cargo and crew belongings were undisturbed; and while the ship was dishevelled, she was still well-provisioned and seaworthy. None of those listed as being aboard her were ever heard from or seen again. At the salvage hearings in Gibralter, theories such as mutiny, piracy, and foul play by the Dei Gratia’s crew were all put forward, but with no evidence to support any of them, were dropped. More recent theories include seaquakes, water spouts, attacks by giant squid, and the always popular paranormal intervention. That last is often espoused because of the maritime superstition surrounding the renaming of a ship.

And there you have it, three real-life, never solved mysteries to use in your tabletop campaign. Maybe your party comes across an abandoned vessel while taking ship from one location to the next (and how much cooler would that be with airships?). Or maybe your group answers the call of a town in trouble, only to discover upon arriving that the town in its entirety is missing. And strange manuscripts are bread and butter for confounding your players, and make a great opportunity to flex your artistic muscles and create a fantastic table prop.

What real-life mysteries inspire your table? Leave a comment below!