It’s actually been a while since I’ve played an SF RPG, so I don’t know if I have a favourite. But I had a lot of fun with TSR’s Alternity system when it came out, back in the 20th century. It had a clever new mechanic and an interesting setting (later, settings) that made it fairly rules light and easy to play, while lending itself to whatever level of sci-fi you wanted on a scale of Space Opera to Hard SF. Before that was GURPS, which of course isn’t an SF RPG per se, but can of course become one. But for sheer flexibility in making whatever type of SF hero you want, GURPS wins. 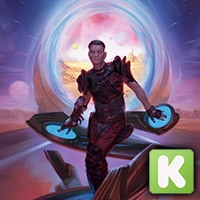 An SF RPG I’m looking forward to is actually being Kickstarted right now. Monte Cook and the gang over at Monte Cook Games are running a campaign to fund Numenera: Into the Ninth World. Spoiler alert: it fully funded in an hour, so now we’re just ticking off the amazing stretch goals until the campaign closes. But if you love Numenera, there is nothing not to love about Numenera in space or dimension hopping. Heck, I’ve backed it and I haven’t even played regular Numenera yet (I know, I know).

And of course, if you want a sci-fi game you can start playing in minutes,

track down a copy of Cosmic Patrol. You’ll recognize it as the Free RPG Day offering you foolishly ignored. But it’s really quick and easy to play, and a ton of fun.

So what’s your favourite SF RPG? Drop it in the comments below and let’s discuss.